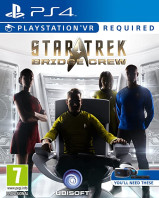 Star Trek™: Bridge Crew will immerse you in the Star Trek universe (VR compatible), The game puts you and your friends in the heart of the U. S. S. Aegis,Your mission: explore a largely uncharted sector of space known as The Trench, in hopes of locating a suitable new home world for the decimated Vulcan populace, The Klingon Empire is also active in the region, and their purpose is a threat to the Federation’s plans, Make strategic decisions and coordinate actions with your crew to complete the mission,In co-op, you can form a crew of four players to serve in the roles of Captain, Helm, Tactical and Engineer, In addition to a dynamic storyline, the game features an “Ongoing Missions” mode, procedurally generating missions for countless hours of Solo and Co-op adventure, In Star Trek™: Bridge Crew, communication, trust, and close crew coordination are the keys to victory
Brand NameSony
Published ByUbisoft
Released Date30 May 2017
Open1
PSN requiredOptional
ConditionSell
PEGI RatingAges 7 and over
Internet RequiredNo
Country of OriginProduct sourced from Individual in India as a pre-owned one