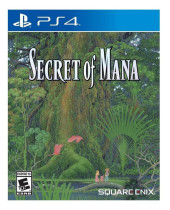 550/- GET IT ON APP
Genre :ActionFirst Person Shooter

he adventure of Randi, Primm, and Popoi is reborn in the new 'Secret of Mana'! Originally released in 1993 and widely regarded as one of the greatest RPGs of all time, Secret of Mana invites players on an action-packed adventure taking on the role Randi, along with his two companions, Primm and Popoi, as they battle a perilous empire to reclaim the magical power of Mana and bring the world back to order
Brand NameSony
Published BySquare Enix
Released Date15 Feb 2018
Open1
PSN requiredNo
ConditionSell
PEGI RatingAges 7 and over
Internet RequiredNo
Country of OriginProduct sourced from Individual in India as a pre-owned one