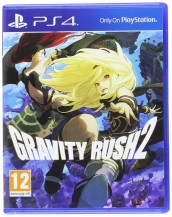 TURN YOUR WORLD UPSIDE DOWN… AGAINCommand the immense forces of gravity as Kat faces a new danger threatening to unravel the fabric of the universe, Alongside former rival Raven, uncover the secrets behind strange gravitational waves sweeping across Hekseville… as a gravity storm of unprecedented scale approaches, Discover new gravity-bending play styles that can even alter the strength – and direction – of gravity itself as you try to save a vast floating metropolis from total destruction, GRAVITY: EVOLVED• Quickly switch between three unique play styles to unlock special attacks,• Fight alongside Raven to unleash tag team moves,• Explore a huge, open world bursting with life, missions and mysteries,• Dare to travel to The Mine – where priceless rewards are found and only the bravest survive
Brand NameSony
Published BySony Interactive Entertainment
Released Date18 Jan 2019
Open1
PSN requiredNo
ConditionSell
PEGI RatingAges 12 and over
Internet RequiredNo
Country of OriginProduct sourced from Individual in India as a pre-owned one